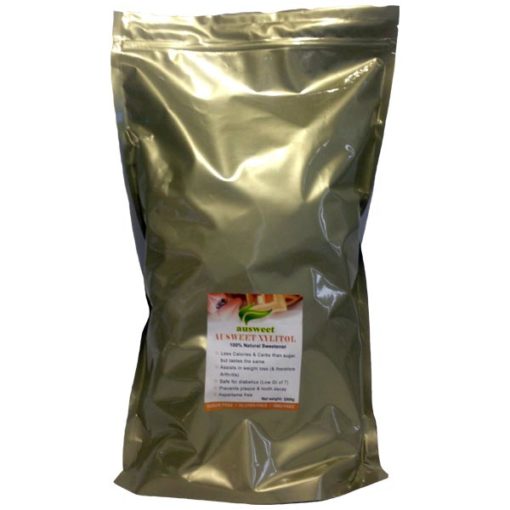 Xylitol is a 100% natural sweetener, with a low Glycemic Index of 7, 40% less Calories and 75% less Carbohydrate than sugar, it can be used in tea, coffee, cookies and any sweet recipes as a healthy sugar substitute. Xylitol doesn’t promote tooth decay, it doesn’t raise blood sugar levels, and it is safe for diabetics.

Ausweet Xylitol is a totally environmentally friendly product, and it does not:

Xylitol is an all-natural substance that is produced by human body during normal glucose metabolism. Xylitol is found in nature in berries, mushrooms, birch trees and corncobs. It looks and tastes like sugar, but with fewer calories and carbohydrates, and teaspoon for teaspoon behaves like sugar in almost all your recipes.

Xylitol has been scientifically known for about 120 years. Discovered independently by Emil Herman Fischer & Rudolf Stahel in Germany and M. G Bertran in France, its potential benefits remained dormant for the first few decades afterwards. During World War II, Finland was suffering from an acute sugar shortage. With no domestic supply of sugar, the Finnish Sugar Company searched for an alternative. It was then that the Finnish scientists re-discovered xylitol, a low-calorie sugar made from birch bark. It had in fact, been known to the world of organic chemistry since it was first manufactured in 1891 by a German chemist.

By 1930, xylitol had been purified, but it wasn’t until World War II that the sugar shortages forced researchers to look at alternative sweeteners. It was only when xylitol was stabilised that it became a viable sweetener in foods. It was also during this time that researchers discovered xylitol’s non insulin-independent nature (it metabolises in the body without using insulin).

By the 1960s, xylitol was being used in Germany, Switzerland, the Soviet Union and Japan as a preferred sweetener in diabetic diets and as an energy source for “infusion therapy” in patients with impaired glucose tolerance and insulin resistance. Since then, many other countries including Italy and China have been producing xylitol for use in their domestic markets.

Although xylitol tastes and looks exactly like sugar, that is where the similarities end. Xylitol is really sugar’s mirror image. While sugar wreaks havoc on the body, xylitol heals and repairs. It also builds immunity, protects against chronic degenerative disease and has anti-ageing benefits. Xylitol is considered a five-carbon sugar, which means it is an antimicrobial, preventing the growth of bacteria. While sugar is acid forming, xylitol is alkaline enhancing. All other forms of sugar, including sorbitol, another popular alternative sweetener, are six-carbon sugars which feed dangerous bacteria and fungi.

Approved by the US Food and Drug Administration (FDA) in 1963, xylitol has no known toxic levels. The only discomfort, that some sensitive people may notice initially when taking large amounts is mild diarrhoea or slight cramping. Since the body makes xylitol daily, as well as the enzymes to break it down, any discomfort usually disappears within a few days as the body’s enzymatic activity adjusts to a higher intake.

The benefits of using xylitol include: